5 Life Lessons from the Legend of Zelda

I have been playing video games for as long as I can remember. I can recollect a time when I was no bigger than a goomba, that my family and I would go to such stores like Circuit City and Toys R Us, and I would be able to play samples of games that were currently on the market. Prior to me getting a NES, the only way I would be able to play these games would be to accompany my parents to these stores. I have a very vivid and early memory of a game that I played in a store for the first time that captured my imagination for many years to come. It was an 8-bit game that feature a heroic sword wielding warrior who traversed dungeons and savage lands to vanquish evil and save a princess; everything a little boy wants to do when he grows up. This game, as it turns out, would become one of Nintendo’s most enduring franchises. The game was the original Legend of Zelda.

Over the years I would play and conquer all of the Zelda titles that were released by Nintendo; A Link to the Past, Link’s Awakening, and Ocarina of Time, just to name a few. I spent countless hours navigating through dungeons, solving complex puzzles, and vanquishing terrifying monsters, so much so that I learned some valuable life lessons from these games. As a Christian, I have found that these lessons actually correspond quite well with what the Scriptures say. So what are we waiting for, lets dive into the life lessons that one can learn from the Legend of Zelda series.

One of the neat aspects about the Legend of Zelda games is that they all begin with some sort of chance encounter or circumstance. In A Link to the Past, Link’s uncle goes off one stormy night and does not return, so Link get up and looks for him, only to find him mortally wounded in a corridor where he gives Link his sword and sends on a quest that will snowball into the epic journey of the game. In Windwaker, Link is exploring the woods with his sister when she is abducted by a giant bird and he goes off to find her. Other Zelda titles feature similar, normal beginnings, but they end up becoming amazing and incredible adventures.

Many of our stories begin like that. In fact, I would say for those of us who are Christians, all of our stories began like that. We were just living life, unaware of the spiritual dangers that were around us. That was, until someone gave us the message of the Cross. After that, our adventure began, and life got difficult, and exciting as we strived to live for Christ within His grace and mercy. I think of the journey of the Christian as an unexpected adventure, much like what Bilbo Baggins received from Gandalf in The Hobbit. When we take the plunge and give our lives to Christ, the real adventure, the real life begins.

Life Lesson #2: Be quick to listen

The Legend of Zelda games stood out from all other adventure type games because of one key factor that makes the games both challenging and fun; puzzles. The game is full of switches, levers, buttons, false floors, weak walls, and any other trigger that can aid Link in navigating through the franchises most sinister dungeons. One dungeon in particular which has caused more “gamer-tantrums” than any other is the infamous Water Temple of Ocarina of Time. Between the rising and lowering of the water levels, and the use of metal boots to sink to the bottom, this dungeon is simply maddening if one does not know what to do. The trick to completing this dungeon is to not lose your cool, and keep your ears open to listen for the classic “mystery chime” that rings every time Link unlocks some sort of secret. In fact, being quick to listen is essential to Link’s success in all of the Legend of Zelda games. 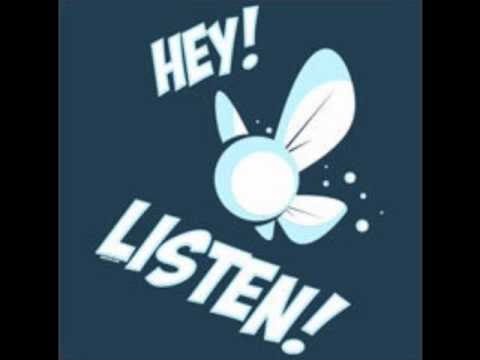 A passage of Scripture that I am constantly reminded of when I am getting frustrated with a situation is James 1:19, which says: My dear brothers and sisters, take note of this: Everyone should be quick to listen, slow to speak and slow to become angry. It is funny to apply this passage of Scripture to the video game world, but let’s face it, how many controllers have we broken when we lost our tempers or got stuck. This passage reminds all Bible readers that the best solution is to stop and listen, and perhaps a solution will present itself.

Life Lesson #3: If you steal, you will be considered a THIEF

In the Game Boy classic, The Legend of Zelda: Link’s Awakening, there is a shop in the main town where Link is able to purchase items that he will need for his journey. Now, you can raise the rupees to buy the items that Link needs, but some of the items are quite expensive. So, as an alternative, you can make Link grab the items, sneak around the store clerk, and walk right out of shop door with the item. When Link walks out the door, text appears overhead that says, “Guess what? You got it for free. Aren’t you proud of yourself?” This is all fine and dandy, but when Link needs to refill his supplies and he walks back into the store, the clerk will be standing there waiting for Link, and after saying “I wasn’t kidding when I said pay!” he zaps Link with magic until your hero is dead. From that time on, all in game characters refer to Link as THIEF, no matter what you registered his name as in the beginning of the game.

I am not sure if the developers knew the impact of the message that they were sending when they put this in the game, but I know as a ten-year-old boy playing this game that the message was heard loud and clear. If you steal, then you will be a THIEF. In that game, Link could not outrun his crime, even after the store owner snuffs him out. Sure, most everyone knows what the Bible says about stealing, it is found right in the Ten Commandments; “Thou shall not steal.” However, the Bible also talks about the lingering consequences of theft. In Proverbs 6:30-31 it says: 30 People do not despise a thief if he steals to satisfy his hunger when he is starving. 31 Yet if he is caught, he must pay sevenfold, though it costs him all the wealth of his house. Even if thievery seems justified, i.e. “I don’t have enough rupees to buy this shovel,” it does not take away the fact that there will be consequences for one’s actions. You have been warned.

Life Lesson #4: It’s alright to take a break every now and then

So the world is in peril once again, the mad sorcerer Ganon has opened up an age of darkness, unleashing untold horrors across the Kingdom of Hyrul and endangering the lives of thousands. What is our hero, Link, going to do about it? He’s going to go fishing, that’s what he is going to do. In pretty much all of the Legend of Zelda games, there are side games that can be played apart from the main story line of the game. Some of these games include archery, mail sorting, strait up gambling, and yes, fishing. No matter what is going wrong in Hyrul, there is always time for a game or two.

As Christians, our main mission in this life is to deliver the Word of God to all of the people and to teach them how to follow the Lord. This mission is a matter of life and death, so naturally it is important to complete. However, the Bible stipulates that everything, including leisure activities, can be done for the glory of God. In Colossians 3:17 it says, “17 And whatever you do, whether in word or deed, do it all in the name of the Lord Jesus, giving thanks to God the Father through him.” Notice that this passage of Scripture commands that all things be done for the glory of the Lord, and not just “church stuff.” So, when you go fishing, thank God for the ability to be able to do so, and use that activity as a way to witness to others. The world may be in trouble, but we can still have some fun while trying to save it.

Life Lesson #5: A good woman is worth fighting for

I find it quite humorous when people watch a game of Legend of Zelda and think that the name of the main character is Zelda. Anyone who has ever picked up a game pad will be able to tell you that Link is the name of the protagonist, Zelda is the name of the name of the motivation. Zelda is actually the beautiful princess of the Hyrul Kingdom, the land where the content of the game takes place (mostly). In any given game, Zelda is either in trouble or in need of Link’s help to save her kingdom or even the entire world. Zelda is not your average damsel in distress, however, there are many games in which she shows herself to be just as much of a warrior as Link. She is pretty, and deadly; definitely a woman worth fighting for and alongside.

Fortunately for me, I have met the Zelda to my Link, and her name is Constance. She is my wife and I have had to fight for her many times in the past and she in turn has fought alongside me through sickness, poverty, depression, and even the good times. Proverbs 31:10 starts off a wonderful description of a worthy women by saying, “A wife of noble character who can find? She is worth far more than rubies.” (The word “rubies” can be changed for rupees, in Link’s case) The truth that can be gained from this chapter is that a truly worthy woman is worth fighting for, just like Zelda is for Link.

One thought on “5 Life Lessons from the Legend of Zelda”