I was four years old the first time that I picked up a video game controller, and since that time I have played thousands of titles that have spanned across many different platforms and hardware, but there is one franchise that has captured my imagination like none other. I am very excited about this newest “5 Life Lessons” post because it is based around a gaming franchise that is incredibly story driven and has captivated gamers for close to 30 years. One of these games in this franchise became a pivotal part of my life, even encouraging me to pursue a deeper relationship with God, but I will get to that later. These are the five life lessons that I have learned from the Final Fantasy series.

For having the title Final Fantasy, this series of games simply does not live up to its namesake. The Final Fantasy series of games is one of the longest running gaming franchises in history, the first game coming out onto the US markets in 1990 (it was released in Japan three years earlier). What was supposed to be a “final” fantasy turned into a series of fifteen games, currently, and many, many spin offs. To date, there are now over forty different titles with Final Fantasy in either the name of the title, or various Final Fantasy characters within the content of the game, e.i the Kingdom Hearts series. Along with this, none of the sequels are even connected; all of the stories of each Final Fantasy title are unique and different in their own way. This series proves that “final” is just a word if it is not backed up with action. 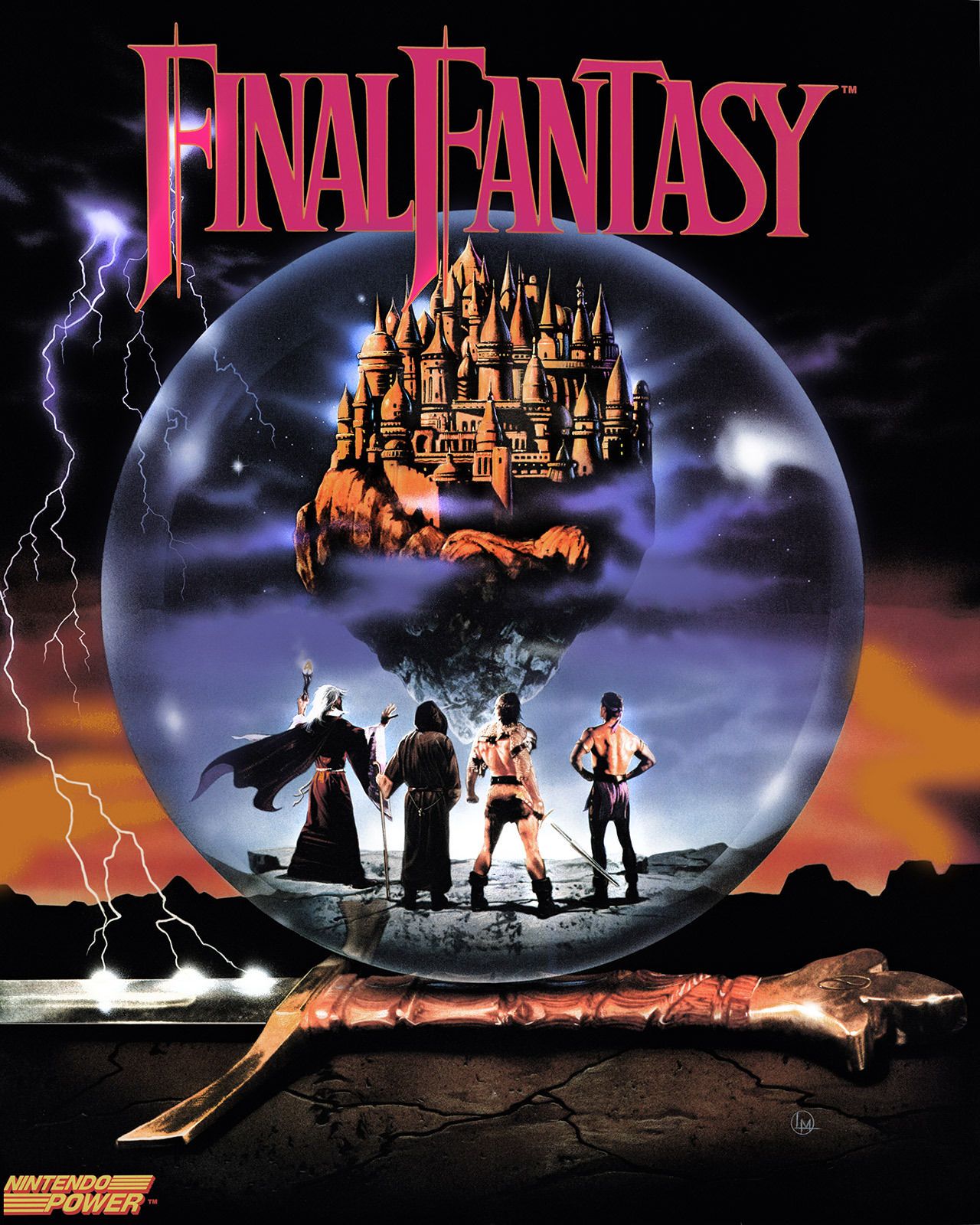 When the word “final”, or “finished” is used in the Bible, you can be sure that it means just that. When Jesus was dying on the cross, he made a very simple, but very distinctive claim; “It is finished.” (Matthew 19:30) This passage of Scripture has been thought of as Jesus’ declaration that the entire Law, the very ordinance that condemned mankind because of their sin against God, had then finished its work, and a New Covenant was being established. This “divine finality” was not simply words, it was a true statement that echoed throughout the ages, and we as Christians are the results of this phrase.

When I was a young boy, the first Final Fantasy title hit the U.S shores and I remember getting my parents to rent it from Blockbuster for me (remember those days!?). I played the game for a grand total of ten minutes, got bored, and gave the game back to my parents to return to the store. I was too young to truly appreciate the core of Final Fantasy’s turn based combat system; tons of strategy. When I got a little older, I got introduced to Final Fantasy III (which is the Japanese Final Fantasy VI), which I not only fell in love with, but it became a very important video game in my development as a young man as its release was very close to a rather difficult time in my life. I learned that strategy is not just something that military geniuses and chess players use, but those who play Final Fantasy games must use it in order to succeed in the games.

Strategic living and strategic gaming have something in common; both activities require thought before decisions are made. The older someone gets, the more responsibilities that they are going to have, and that means more strategic decisions must be made. The Apostle Paul can be seen making these strategic decisions while he was going from city to city during his various mission trips that he took in the book of Acts. In Acts 16:6-10, the Scriptures tell us that Paul was continually kept from going certain places by the Holy Spirit, and that God even used a dream to prompt Paul to go somewhere that he did not intend on going. When a person gives their life to Christ, they are then subject to God’s strategic placement of themselves in some area of His plan. Honestly, there is no better place to be because God is the greatest strategic mind that ever was, and ever will be.

Life Lesson #3: You can never know how far Evil will go

If you are looking for the most epic villains to ever be written into fiction, you can guarantee that the worst of the worst can be found in the Final Fantasy games. Voldemort, Molarity and the White Queen have nothing on Kefka, Sephiroth, Exdeath and Sin. Sephiroth summons a meteor to destroy the planet, Exdeath threatens to bring an age of chaos to the lands, and Sin ravenously eats entire cities for centuries. But just when you think evil has gone too far, Kefka trumps them all by not only unraveling the very fabric of the world’s being, but he shatters the world, killing millions, and leaves it as a former shadow of its lush origins. In the process, Kefka actually becomes a god and rules what’s left of the world with an iron fist in a tower that is made from the debris of the civilizations that he destroyed. In Final Fantasy VI, just when you think it gets bad, it gets much worse.

All of those villains are pieces of fiction, but a very real villain exists that is not only powerful, but is also hell bent on the destruction of everything that God has established. He has many names, Satan, Lucifer, the Devil; no matter what he is called, he is simply evil. And don’t make the mistake in thinking that he is just sitting by, not engaging in an attack on his enemies; the Bible is very clear that the devil and his armies are all about destruction. He wants to destroy every part of your life, and if you are not living your life for Jesus Christ, then he just lets you follow the course that you are traveling. After all, why would the Devil bother someone who is already on the path to destruction?

If I have learned anything from video games, it is that if you encounter enemies on your journeys, then you are usually going the right way. In the case of Final Fantasy games, this is not only true, it is an essential lesson to learn, because in order to succeed, your party of characters must gain experience. In most JRPGs (Japanese Role Playing Games), Exp., or experience points, are gained when your party discovers and defeats a monster or group of monsters. This Exp. is tallied over time and the characters slowly increase in their Lvl., or levels. Basically the more scraps that you get into, the more powerful you’re going to become.

If a person lives a sheltered life where they are not given any opportunities to fight through trials of many kinds, then they are not going to develop the skills that are needed to succeed in this life. It says in Romans 5:3-4, “3 Not only so, but we also glory in our sufferings, because we know that suffering produces perseverance; 4 perseverance, character; and character, hope. The difficulties of this life, all difficulties, help us to gain experience, and in turn we gain new skills that help us to persevere throughout our entire lives. We should not think of difficulties as being undesirable events, but rather opportunities to grow.

The reason I enjoy reading science fiction and fantasy is largely because the good books are the ones that have wonderful, multi-faceted characters with deep and interesting back stories. The Final Fantasy games are full of these types of characters, each one being different from the next, with various motives and agendas that drive their behavior. Some of these characters are odd, I mean really odd, even as far as video games are concerned. For example, in Final Fantasy VII there is a mechanical cat creature called Cait Sith who accompanies the heroes and beats enemies with dice and gambling style moves. Some other characters, like Titus from Final Fantasy X have a mysterious back story that is ultimately unlocked near the end of the game and decides the very fate of every other character that he travels with (I have a no spoiler policy, no worries). Each character is odd and has a different ways of fighting and communicating, which makes for a great gaming experience, but it also relates to life as well.

The Bible tells us that everyone is unique in how God has made them. In Psalms 139:13-16 it says, “13 For you created my inmost being; you knit me together in my mother’s womb. 14 I praise you because I am fearfully and wonderfully made; your works are wonderful, I know that full well. 15 My frame was not hidden from you when I was made in the secret place, when I was woven together in the depths of the earth. Every one of His creations is unique, and that is especially true for people. God has granted each one of us amazing skills and abilities that do not match the person in the next pew over, and that is OK. The differences are what makes the Kingdom of God so versatile, and it is one of the best lessons that a person can take away from being a part of a church.

Earlier I mentioned that one of the Final Fantasy games actually aided me in perusing a deeper relationship with the Lord, and as odd as that may sound, it is very true. The game was Final Fantasy VI (the US Final Fantasy III), and I remember being drawn to a character named Edgar. Edgar was young king who had inherited his kingdom after he won a coin toss to his twin brother, Sabin. Edgar wanted nothing more than to protect his people, but he found that he could not do so in his own kingdom; he had to leave and join other heroes to protect his lands. I was the oldest in my family, and I often felt like Edgar; the one who needed to do everything right in order to not only make his parents proud, but also be a good example to his little brother too. This amazing story encouraged me to look deeper at my own situation in my life, and I discovered that I was trying to please everyone except for the one who really mattered; God. That is why, to this day, I try to play through Final Fantasy VI once every year, because the story of Edgar and Sabin reminds me so much of my brother and I.

So, what is your favorite Final Fantasy game, and what life lessons have you taken from it? For me, my favorite is obviously the 6th installment of the series, but I don’t have to convince you that it is the best. Just watch Sabin suplex this train; there, your argument is officially invalid.